Sun Salutations, known in Sanskrit as Surya Namaskar (pronounced Sur-yah-Namah-skar), comprise a flowing sequence of 12 powerful yoga poses with profound benefits. Here you’ll find out what those poses are, how to practice them, and tips for a transformative experience.

The origins of Sun Salutations date back to the ancient Vedic period in India, where the sun was worshipped for health. The ancient Rishis recommended a regular Sun Salutation practice for when the sun falls on the solar (sun) plexus, considered the central point of the body, it expands creative and intuitive abilities, calms the mind, and more. Hence, Sun Salutations are usually practiced (on an empty stomach) at sunrise facing the health and life-giving rising sun.

Sun Salutations can be a stand-alone practice or used as a warm-up for a full asana practice (if the latter, traditionally three rounds are recommended).

There are several versions of Sun Salutation sequences—but it is best to choose one and develop your practice for maximum benefit. The following sequence is the most traditional version of the Sun Salute and actively engages all parts of the body. You can learn this sequence with certified instructors via a dedicated Sun Salutation class at the online Art of Living Yoga Studio.

Each Sun Salutation (one round) consists of two sets of the sequence. The first leading with the right leg, and the second leading with the left in the fourth and ninth positions (per the below sequence). Start by doing two to four rounds and gradually build up to twelve (or even 108!). And if you’re new to yoga, remember to do a short warm-up!

Click here for a full guide to Sun Salutations. 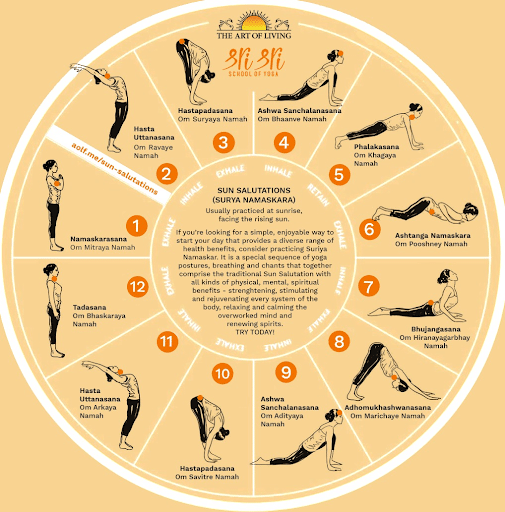 1. Be consistent: To achieve the best results, practice regularly. It is better to be consistent with a short daily practice than be sporadic with long practice periods.

2. Listen to your body: Know your body and its limits. Each day will be different—allow your practice to reflect this. Honor and respect your body—that is true yoga.

If you’re new to yoga and Sun Salutations, it’s best to learn with an experienced and certified instructor—for the correct technique (and to keep your body safe!), which will result in maximum benefit. Visit the online Art of Living Yoga Studio to begin your journey. Enjoy the practice!